Growing pains are one of those unique experiences in life that many families go through, yet few know how to deal with them.

They can be scary for both parents and kids, especially when the aching, throbbing, pulsing pain wakes a child (and thus their parents!) up at night.

Thankfully, the days when growing pains were seen as “all in the mind” are gone for good.

However, while physicians and child development experts now know that growing pains are real, this hasn’t extended to developing effective treatments for the incredible discomfort.

So if your child is suffering from growing pains, you may be feeling very frustrated trying to figure out what you can offer to ease your his or her suffering!

In this article, we’ll be discussing 5 awesome essential oils for the growing pains that your young one may be going through.

Growing Pains: What We Know

Growing pains most commonly occur at night and typically affect both legs behind the knees, in front of the thighs and down the calves.

They can be intense enough to wake the child at night and they often begin during the pre-school and elementary school years, though some also experience it during early adolescent years.

An interesting point to note, however, is that there is no evidence linking growing pains to growth spurts. Instead, some experts suggest that they may just be muscle aches resulting from the daily activities (running, jumping, climbing) that kids love to do during the day.

Lavender Essential Oil
Packed with anti-inflammatory and analgesic (pain relieving) properties, while also being mild in nature, lavender oil is perfect for the easing physical discomfort accompanying growing pains, as well as the mental angst that may be tormenting your little one.
$28.00
Buy on Pure Path

Peppermint Essential Oil
The menthol content in peppermint oil brings a cooling sensation while also shuttling away pain impulses and improving circulation. As a bonus, it can also be used as a decongestant during the winter months.
$27.33
Buy on Pure Path

Roman Chamomile Essential Oil
Roman chamomile doesn’t just blunt the pain, but it also works quickly to address the source of the discomfort as well thanks to its anti-inflammatory properties. Furthermore, this natural sedative can help with any insomnia that may accompany growing pains.
$60.00
Buy on Pure Path

Helichrysum Essential Oil
This rare essential oil works to reduce joint & muscle inflammation & aches in a way similar to modern western corticosteroid medications. It is packed with anti-inflammatory compounds such as curcumene, which is in the same family of the well-known curcumin in turmeric.
$100.00
Buy on Pure Path 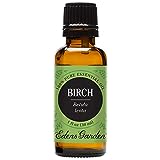 Birch Essential Oil
This powerful oil is a potent treatment intervention for bone, muscle, joint and other soft tissue pain and is actually a go to among arthritis sufferers, however, it works just as well on growing pains.
$20.95
Check on Amazon

Lavender oil is one essential oil that should be kept in your home, not just for growing pains, but because it has a long list of uses and applications for the home and family.

It is actually considered one of the most versatile essential oils (it’s a 3-way tug of war between lavender, lemon and peppermint).

Different species of the lavender plant have different concentrations of active compounds, which include camphor, terpinenes, linalool and linalyl acetate, among others and these compounds are linked to this essential oil’s known calming and sedative properties as well as anti-inflammatory, anti-spasmodic and analgesic (pain relieving) abilities.

Whenever pain is the topic of discussion, lavender is always at or near the top because its effectiveness is unquestioned and many people have found relief for centuries.

Furthermore, lavender oil works on different types of pain and its properties can be received both topically and aromatically.

Another plus for lavender, especially for growing pains, is that it is one of the mildest essential oils out there and can therefore be used on children of all ages.

Still, dilution is always suggested to be on the safe side.

Combine about 4 drops of lavender oil with about 1 teaspoon of a carrier oil such as olive or coconut oil and massage into the legs of your little one when the aches and pains start.

Inhalation is also suggested for best results so you can also use lavender in a diffuser or in a “homemade” diffuser of a few drops in a pot of steaming water. Alternately, direct inhalation straight from the bottle is also an option.

Every home with children should have peppermint oil stocked and always ready to go.

The minty aroma of this oil is known to relieve congestion and improve breathing but its ability to ease pain is something your children will appreciate just as much.

Peppermint oil’s ability is mainly thanks to its menthol content which provides a cooling effect that whisks pain impulses away from the legs and soothes the inflammation. Another benefit is that it improves circulation which expedites the healing process by bringing oxygen and nutrient rich blood into the area more quickly.

To use this oil for growing pains, topical and aromatic application is suggested.

Combine 2 to 3 drops of peppermint oil with 1 teaspoon of a carrier oil and massage into the legs of your child.

Roman Chamomile is perhaps best known as a herbal remedy to promote relaxation and good sleep.

But chamomile essential oil has its own equally potent pain-relieving powers, and like lavender, it has a very mild nature which makes it suitable for children and those with sensitive skin.

Roman Chamomile essential oil can calm both body and mind. This potent analgesic and anti-inflammatory doesn’t just blunt the pain, but it also works quickly to address the source of the discomfort as well.

Furthermore, it is a natural sedative, which can be especially beneficial when a child is woken up by growing pains and then can't go back to sleep.

To use Roman chamomile oil for growing pains, you may want to use it as both an inhalant (diffuser, steam bath) and as a massage or topical diluted oil in your favorite carrier oil to get the full benefits of mind/body relief.

Dilution is similar to lavender i.e. 4 drops per teaspoon of carrier oil.

Helichrysum, from the Asteraceae family of Mediterranean medicinal plants, isn’t very popular and is quite hard to find because the soil and climate requirements for the source plant to grow are very specific.

Those who do manage to acquire it, however, love its long list of healing properties such as its anti-inflammatory and pain relieving compounds.

One of these compounds is curcumene, which is in the same family of the well-known anti-inflammatory agent curcumin present in the spice turmeric.

This essential oil works to reduce joint and muscle inflammation and aches in a way similar to how modern western corticosteroid medications do.

You can dilute 4 drops with 1 teaspoon of your favorite carrier oil and use it as a massage oil.

Extracted from a number of birch tree species (most notably the white and silver birch trees), this oil is sometimes also called sweet birch essential oil and has been used in aromatherapy for centuries.

This powerful oil is a potent treatment intervention for bone, muscle, joint and other soft tissue pain and is actually a go to among arthritis sufferers, however, it works just as well on growing pains.

You can use birch essential oil in three key ways: as a massage or topical oil, in a diffuser or in a warm bath. There are advantages to using this oil as a scent and a topical pain easement simultaneously.

Diluted and applied topically or used in a massage oil, birch essential oil can help reduce inflammation and ease pain. When inhaled by using a diffuser or adding a few drops to a pot of boiling water or a warm bath, the scent can calm the nervous system, reduce anxiety and promote enhance restful sleep.

For a good topical massage oil, dilute 2 drops of birch essential oil with one teaspoon of a carrier oil.

Copaiba Balsam oil, extracted from the naturally occurring resin (balsam) of the Copaiba family of trees, is one of the best essential oils for easing almost any type of pain and is considered generally safe for use by all ages (except  pregnant or breastfeeding women and couples trying to conceive).

Many trees in the Copaiba family are found naturally in the Brazilian rainforests of South America. When the trees are tapped (a process used to extract the resin that is not unlike how maple syrup is extracted from maple trees), the resulting essential oil is naturally high in anti-inflammatory compounds called sesquiterpenes.

Balsam oil is best used when diluted in your favorite carrier oil (jojoba, almond, olive, coconut, et al). You can add 2 drops of copaiba balsam oil to 1 tablespoon of carrier oil and use as a massage oil for your child’s legs, back and spine.

Another option for using balsam essential oil to ease growing pains is to add a few drops to a warm bath or to your home essential oil diffuser.

Essential oils have long been used as an effective treatment method for all types of pain for centuries.

In recent times, many families have adopted the use of these oils to ease the physical aches and mental state of their young ones during their time of extreme discomfort brought on by growing pains.

One of the main keys to the effectiveness of using essential oils for easing growing pains, however, is to ensure that the mixture is massaged into the legs of the child and isn’t just applied and left to dry.

My gift to you! It's a downloadable PDF for your fridge, purse, or bag!